Hydrogen is expected to play an important role in the energy transition as global society aims to decarbonise its energy system and take action on climate change. But how is hydrogen produced? Why is it so promising? You can watch our Hydrogen explainer video by clicking below. 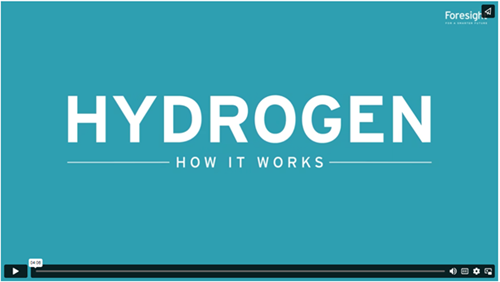 Hydrogen can be produced in many ways. Each production pathway is referred to by a different colour. Collectively these are known as the hydrogen rainbow. Grey, blue, turquoise and green hydrogen are among the most common. The hydrogen produced is identical in each case. However, different pathways have different by-products and associated carbon emissions.

Grey hydrogen is currently the most common way to produce hydrogen. It’s generated from natural gas in a process where the hydrogen is separated from the carbon. The hydrogen is captured, while the carbon is emitted into the atmosphere as a greenhouse gas. This ultimately contributes to climate change.

Blue hydrogen is produced in the same way as grey hydrogen. However, instead of emitting carbon into the atmosphere, a percentage is captured and stored underground. It can be stored using geological sites, like a seabed rock structure.

Turquoise hydrogen is produced through the methane pyrolysis process. Natural gas is split into hydrogen and solid carbon, referred to as carbon black, which can then be used in tires, coatings, inks, plastics and more. Pyrolysis is defined as the temperature decomposition of organic material, in an inert atmosphere, one without natural gasses, including oxygen. Plasma torches are foten used to obtain a high enough temperature, above 2,000 degrees Celsius.

Green hydrogen is produced by electrolysis. Water is split into hydrogen and oxygen in a process that is powered by renewable electricity. The process itself has no carbon emissions and is therefore optimal for decarbonising the production of hydrogen.

Hydrogen has huge potential to contribute towards the energy transition. Electricity can be hard to use directly in several carbon-emitting industries, such as manufacturing, cement and heavy mobility, where high-grade heat is required or weight is an important consideration. Here, hydrogen is a reliable and effective alternative. If green or blue is used instead of coal in the production of steel, then the steel will have a much lower carbon footprint.

Green hydrogen can be used to balance the variability of renewable energy in the electricity grid. Renewable energy output depends on when the wind blows or the sun shines, creating imbalances in the grid. This means that alternatives such as fossil fuels have to be used to support demand when renewable supply is unavailable.

Electrolysers can offer a flexible source of demand. By turning on and off as renewable power requires, they can provide demand side response as a form of grid balancing. Another key benefit is that hydrogen can be used to facilitate the movement of energy, from where it is cheaper to produce to where it is required. Long-distance distribution networks can be expensive and difficult to build, slowing down the energy transition. Hydrogen offers an alternative method of transporting this energy, be it via pipeline, truck, ship or in the form of a derivative product.

Foresight is investing in hydrogen production projects in the UK and Germany. These projects will use renewable energy from solar and wind farms to produce green hydrogen for use in industry and transport. This helps to allow these difficult-to-decarbonise sectors to share in the benefit of renewable power.

Be part of our journey

Foresight Group Holdings; Investing for a smarter future. Complementary infrastructure and private equity strategies underpinned by a focus on sustainability and ESG. Find out how you can be part of the journey.