To most of us, 3D holograms are a thing of science fiction – think Star Wars and Minority Report. But perhaps surprisingly, the technology to bring them into the real world already exists and is on the verge of entering the mainstream.

The mission to blend computer-generated graphics into our world has already started; many will remember Niantic’s augmented reality game Pokémon Go taking the world by storm in 2016. Players of the game were able to see virtual Pokémon occupy the space around them when looking through their smartphone screens. As enjoyable as this was for hundreds of millions of players, seeing an animated character on a phone screen isn’t a particularly immersive experience.

Mixed reality devices such as Microsoft’s HoloLens have also experienced more widespread adoption, particularly amongst industrial and enterprise users. Headsets like these which can blend the real and virtual worlds have provided a huge step towards a truly immersive experience. These devices do however have their own limitations when it comes to providing an immersive mixed reality experience, often suffering from a bulky form factor, and lack realistic 3D depth.

3D depth is the concept of objects falling into or out of focus as your eyes centre on points of varying distance, e.g. if you look at an object right in front of your eyes, everything in the background will blur out of focus. This is an effect that products like the HoloLens have not been able to recreate.

Why should I care about 3D depth?

Recreating realistic depth may not seem like such a big issue, but it can make the difference between feeling fully immersed in a mixed reality experience and having a computer-generated object stick out like a sore thumb. Figure 1 demonstrates how out of place background objects can look without 3D depth being applied appropriately. On top of this, many people who use AR and VR headsets report nausea and headaches. It’s likely that the lack of 3D depth plays a significant part in this. After all, focus plays a huge role in your brain’s interpretation of distance, so it’s no surprise that some people’s brains get ‘confused’ by digital objects that do not focus and de-focus appropriately. 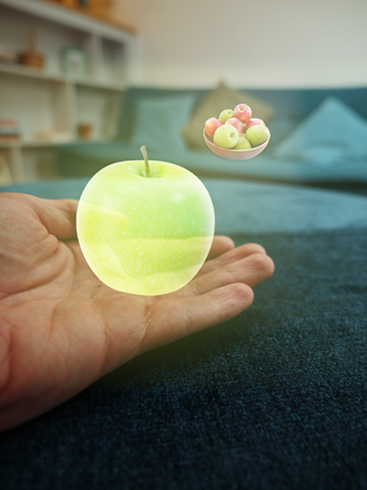 True holographic displays offer experiences where digital objects with natural depth perception can be projected into the real-world environments. Where a MS Hololens uses object size, angle and shading to give the perception of depth, next-generation devices using holographic display could place objects anywhere from the palm of your hand to the horizon. Beyond headsets like Hololens, holographic displays can be places in immersive head-up displays in cars, or as a stand-alone display for consuming 3D content, such as gaming laptops.

With the hardware ready to go, why aren’t holograms everywhere already?

The hardware necessary for holographic displays has been available for about a decade now, which begs the question of why it’s taking so long for consumers to have access to it. You might assume that this all comes down to cost or size, as is often the case with consumer electronics. However, in this case, the reasons are slightly more complex.

Even with the recent advances in CPU and GPU technology, the computational requirements for rendering even simple holograms (Computer Generated Holography - CGH) on head-mounted displays have been too high. While reducing the size of a holographic display could help with this, unfortunately, low-resolution holograms struggle to provide an immersive experience, even in head-worn devices. The processing power required by algorithms normally used for CGH scale very poorly with display resolution, i.e. a small improvement in resolution may require several times as much processing power.

So, for the world to have ubiquitous holographic display technology, one of two things need to happen. We either need a huge leap forward in processor technology in a world where Moore’s law is beginning to fail, or we need a completely new generation of algorithms that allow high-resolution holograms to be rendered in real-time, with reasonable computational demand.

Fortunately, the latter of these two has been achieved by VividQ.

The significance of VividQ’s technology can’t be stressed enough. Their breakthrough in CGH is the final piece of the puzzle that will allow immersive virtual content to be projected into our world. Having raised £17m to date, VividQ has established partnerships with leading projection display manufacturers and tech providers like iView, Mo-Sys and Arm. Their achievements have not gone unrecognised either; VividQ have been named “Best British Tech Pioneer” by KPMG, and won Alibaba Jumpstarter Top Innovative Start Up Prize, and ACM Siggraph Best Research Award.

It’s hard to see a future without holography, which has long been regarded as the holy grail of displays. It has the potential to deliver what consumers have long expected, but not yet received, from AR displays, and there have been strong signals from the giants of the industry that holography is the direction of travel. We look forward to working with the VividQ team as they play a key role in unlocking the full potential of holographic displays.

If you would like to learn more about how we can help support you to achieve your business ambitions, we’d love to hear from you. Please contact us on 020 3367 8100 or email peinfo@foresightgroup.eu.

Be part of our journey

Foresight Group Holdings; Investing for a smarter future. Complementary infrastructure and private equity strategies underpinned by a focus on sustainability and ESG. Find out how you can be part of the journey.